What is the difference between Placenta Previa and Vasa Previa

At my 12 week scan, the tech said I had a low lying placenta. My GP told me it usually resolves itself, so no need to worry about it at this stage.

At my 20 week scan, it was still covering my cervix, and the doctor at the hospital said that I had complete Placenta Previa, which is where the placenta is completely covering the cervix. I was booked in for a c-section at 38 weeks, but was told that we would keep monitoring it in case it moved, as most Placenta Previa cases resolve.

My next scan was at 32 weeks, and that pesky placenta was still a complete previa. I was still told there might be hope for it to move, so had another scan booked at 36 weeks just to have a final check. I was hoping so badly that it would move, because I really wanted a natural birth. And yes, I know now that birth plans almost NEVER work out, but I was a first time mum!

I went and had my 36w scan at my hospital, which luckily was a tertiary women’s hospital. All my other scans had been at just a regular radiology clinic. Looking back now, I am beyond lucky that my doctor had organised that last scan, and that it was done at the hospital. I really don’t even want to think of what would have happened if I hadn’t had that scan.

So in I went, thinking ‘maybe it’s finally moved and I can have my natural birth’! They started the scan, and then the tech went quiet for a few seconds. She then said (probably in an effort not to alarm me) ‘your bub looks such a good size for 36w!’ I asked if anything was wrong, and if the placenta had moved. She said ‘I’m not sure what’s happening with the placenta, but it’s definitely still blocking. I’m just going to get the specialist to come in and take a quick look’.

She went and found the specialist on call, who came in to look at the scan. They turned the colours on to see the blood flow, and even did an internal scan. They looked pretty concerned by this stage, and said to me ‘there seems to be some issues with your placenta, can you just stay in the waiting room for a while? Bub may have to come out earlier than we planned’. I thought this meant maybe next week instead of 38 weeks. So I went and waited. I had waited 2 hours, without any food, and my phone battery was dying!

Finally, a doctor came out to talk to me. She explained that the placenta had actually split, and there was now an exposed vein that was lying across my cervix opening. The vein belonged to my baby. If I started to have contractions, or if he engaged, or if my water broke, there was a good chance he would crush the vein and bleed out. I was not allowed to leave the hospital, I would be admitted right there, and bub was to come out first thing the next morning!

I had no choice but to call hubby, who quite rightly was freaked out, we weren’t ready! He had to finish packing my hospital bag and bring it to me, while I just sat and waited at the hospital. I was taken to the post-natal ward, and was told I couldn’t leave the ward. If I started bleeding at all, don’t press the call button, rip it out of the wall! That’s when I began to realise the severity of the situation.

The next morning, the anaesthesiologist came and said I would have to be put under general, and hubby would not be allowed in the OR. Because they had to cut through my placenta (it was also anterior) there was a high risk of haemorrhage. So neither of us even got to see my son being born! I was so sad about this and really did try and fight it. The surgeon said she would keep me under for as little time as possible, so I would wake up faster and be able to do skin to skin. This did mean I had a catheter placed while awake (definitely DO NOT RECOMMEND)!

I ended up being able to hold my little boy about an hour after, immediately did skin to skin. At the end of the day, he was safe, I was safe, and that’s all that matters! We managed to breastfeed after a lot of pumping and pain, but that’s for another blog.

When I was discharged, we ran into my surgeon in the lift. She said to me ‘honestly, we were all quite scared when you were admitted, and even in the OR’. When I went home I did some thorough research on Vasa Previa, and I realise just HOW LUCKY we really were!

VP is a super rare condition (something like 1 in 10,000 pregnancies) where one or more of baby’s veins are exposed, usually over the cervix, and at risk of being crushed if labour starts. If not picked up, fatality rate is super high (over 90%) for the baby, and a high risk of haemorrhage for mum too. Best practice treatment is that mum is hospitalised from around 30w, and baby delivered by c-section at 34-35 weeks. I was walking around up to 36w, with no idea that I had a ticking time bomb in my belly! 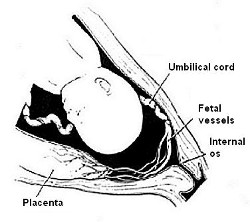 My VP was never picked up at any of my scans at the general clinic, only by the experienced staff at my hospital. I am now part of a virtual network of VP mums all over the world, who are pushing to create more awareness of this potentially fatal condition. A lot of techs, and even OBs, still don’t know to look for this condition during routine scans, and downplay the severity of it. I tell all my pregnant friends to make sure they ask the questions at every scan, about their placenta placement, and to make sure to keep an eye out for any warning signs, including:

If you do have a diagnosis for VP, push for hospitalisation. It’s the safest place to be for you and baby. Bleeds can happen without warning, for no reason whatsoever, and if you are not close to a hospital (we’re talking minutes) there is a good chance you could lose your baby.

We were so lucky to have just been in the right place at the right time, and I’m so thankful for that every day – even through tantrums and 5am wake ups!

Join us and get nice things